Jul 21, 2019
Invisalign vs. Metal Braces, The traditional form of teeth realignment for decades. They have been around forever… for-ev-er!!! But now there’s a new kid on the block: Invisalign.

Invisalign vs. Metal Braces, The traditional form of teeth realignment for decades. They have been around forever… for-ev-er!!! But now there’s a new kid on the block: Invisalign. It’s a new technology, so completely different from traditional/metal braces. But they’re braces, so let’s ask the question: What’s the difference?!?

Metal braces are a set of wires and bracket – all made of metal – that are permanently attached to the wearer’s teeth.

Invisalign is a series of 18 to 30 plastic trays worn for two weeks at a time.

Metal braces and Invisalign are both used to realign and level the wearer’s teeth, the difference is in the application.

Metal braces come with a lot of rules. Can’t chew gum. Can’t drink soda. Cant’s eat chewie or gummy candies. You have to meticulously clean the wires and brackets after every meal so that you don’t get a build-up of old food/bacteria that could cause other oral health issues.

Invisalign vs. Metal Braces. Invisalign doesn’t have any such rules; since they are removable, you can take them off your teeth and out of your mouth when you eat or drink anything. You could still chew gum or eat gummy candies though your orthodontist might suggest you avoid it.

Metal braces are known for being a bit uncomfortable; because of the wires needing to be tightened on occasion, and the brackets rubbing against the gums and causing sores, going the traditional route may not be the most enjoyable.

Invisalign doesn’t have any such issues. If they start feeling uncomfortable, they can be removed and there isn’t the chance of having such issues. 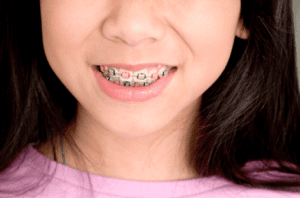 Unless you have Lingual braves – which are still made of metal and sit behind the teeth and come with all of the same rules – traditional braces are super visible.

Invisalign – as the name suggests – are mostly invisible. Because they are made from clear plastic, most people aren’t going to even notice you’re wearing braces unless they specifically stare at your teeth or you show them.

Both traditional braces and Invisalign are comparable when it comes to the overall cost. The benefits of both for the sake of oral health are undeniable, that’s for sure. There might be a lower overall cost for metal braces, but both are equally affordable, and looking at the beneficial aesthetic of Invisalign, it’s less of an expense and much more of an investment.